Employers have been busily preparing in anticipation of a December 1, 2016 effective date for new federal regulations established by the Department of Labor (the “DOL”) that would have increased the requisite salary level for employees to qualify as exempt from overtime under the so-called white collar exemptions to the Fair Labor Standards Act (“FLSA”).

Yesterday, however, a Texas Judge issued a preliminary injunction blocking the scheduled increase.  The injunction, which applies nationwide, was issued in connection with a legal challenge filed by 21 states and numerous business groups in the United States District Court for the Eastern District of Texas. Click here for more information about the injunction and practical considerations for employers. 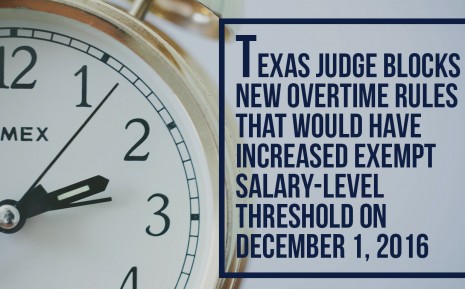